Oceanside, California, December 22, 2015, Stephanie Stormo, Chief Instructor at the U.S. Navy, has been recognized by Elite Women Worldwide, for dedication, achievement and leadership in military services.

Ms. Stormo is recognized for her more than 20 years of dedicated military service with the U.S. Navy. Her latest accomplishment in her career has been being promoted to chief instructor. She was bestowed this promotion for her ability to reach goals and take full responsibility in any role she has undertaken or been selected for. Working as the only female in her workplace has been a great challenge, but she endeavored to be seen as an equal. Another obstacle she has faced is being a single parent; however, she says her son is also one of her greatest accomplishments and sources of strength.

At the encouragement of a friend, Ms. Stormo met with a Navy recruiter, who upon meeting her was impressed with her credentials. She completed numerous certifications and earned a high school diploma to prepare for a career and soon found success with various promotions. As a mentor to her peers and younger servicemen and women, she is tasked with training and teaching others to be leaders. Ms. Stormo says she learned a great deal from the individuals she has trained.

Looking toward the future, Ms. Stormo knows her possibilities are endless with the career she has led in the Navy, and aims to transition and set new goals in a few years. She continually looks to push herself and her limits and be remembered as an individual who presses on through hard times. In addition to new career opportunities, Ms. Stormo plans to run more half marathons and support her son’s sports teams. 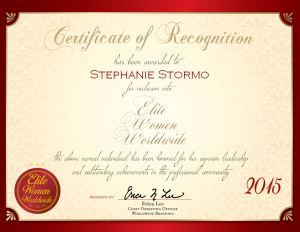