As an advocate for local movements, involved in coastal issues and fishery, Sen. Fuller Clark is proud to represent her constituents in New Hampshire. In addition to her position, she sits on the U.S. Senate Committee on Energy and Natural Resources and the Internal Affairs Committee. She has represented the 21st District of New Hampshire since 2012, and previously represented the 24th District from 2004 to 2010. From 1990 to 2002, Sen. Fuller Clark was a member of the New Hampshire House of Representatives, which is the largest House of Representatives in the country. END_OF_DOCUMENT_TOKEN_TO_BE_REPLACED 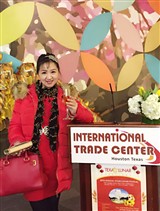 Houston, TX, April 12, 2016, Dr. Hong Mei, Vice President of Advanced Energy & Environmental Technology, has been recognized by Elite Women Worldwide for her achievements, dedication and leadership in the oil and energy field.

An expert in petrophysics, Dr. Mei has committed two decades to the integration of multi-disciplinary information in geology, geophysics and geochemistry. In her role with Advanced Energy & Environment Technology, she works to improve the accuracy and reliability of prospect identification and hydrocarbon detection in complex geological settings. She demonstrates astute knowledge of exploration efficiency and has led teams in drilling new wells to provide interpretation of the elements contained within. Dr. Mei also works on geoscience application projects as they pertain to clastic reservoirs and unconventional carbonate reservoirs.  END_OF_DOCUMENT_TOKEN_TO_BE_REPLACED