Martinsville, IN, July 25, 2016, Myra Borshoff, Owner of MB Communications LLC, has been recognized by Elite Women Worldwide, for dedication, achievement and leadership in public relations.

In 1984, Ms. Borshoff opened a small public relations firm with a partner and a single employee. Thirty years later, that firm grew into the largest in Indiana, with 60 employees and high-profile clients such as the Indiana Colts. She retired from this firm in 2010 and stayed on board until 2014. However, retirement didn’t last long for Ms. Borshoff, whose passion drove her to return to the industry and take on new projects and clients. With MB Communications, Ms. Borshoff endeavors to build a new firm from the ground up, while meeting new people and facilitating conversations. She remains active in her field with affiliation to the Registered Women-Owned Business Enterprise, the American Advertising Federation, the American Marketing Association, the Public Relations Society of America and the International Association of Business Communicators.

Contrary to where her career landed, Ms. Borshoff earned a Bachelor of Science in secondary education. With no job openings in the field when she moved to Indiana, she started working in a bank which allowed employee tuition reimbursement. She took advantage of this benefit and took classes in public relations. With confidence, Ms. Borshoff opened her own firm soon after. Since then, Ms. Borshoff has become involved as a board member of the Indiana Chamber of Commerce, the Greater Indiana Progress Committee, the Children’s Bureau and Professor Garfield Foundation. She has been recognized by her alma mater, where she was inducted into the Ball State Journalism Hall of Fame. She has also achieved Fellow PRSA status, which is the highest achievement in the public relations industry. 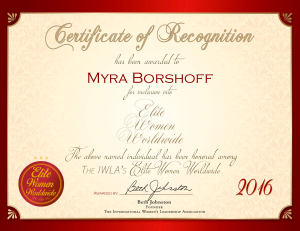