As an advocate for local movements, involved in coastal issues and fishery, Sen. Fuller Clark is proud to represent her constituents in New Hampshire. In addition to her position, she sits on the U.S. Senate Committee on Energy and Natural Resources and the Internal Affairs Committee. She has represented the 21st District of New Hampshire since 2012, and previously represented the 24th District from 2004 to 2010. From 1990 to 2002, Sen. Fuller Clark was a member of the New Hampshire House of Representatives, which is the largest House of Representatives in the country.

Sen. Fuller Clark is proud to serve her community, especially when it comes to preserving heritage and culture. She entered politics from her background as an architectural historian, where she was heavily involved in initiatives in the 1980s to protect resources. In her position, she strives to make a difference in her community on both local and state levels. She serves as the vice chair of the New Hampshire Democratic Party and is a member of the Democratic National Committee, where she serves on the resolutions committee. She is the board president of the Strawbery Banke Museum, and involved in the Women’s Fund of New Hampshire. She maintains affiliation with the Garden Club of America, Americans for Campaign Reform, an advisor for The National Trust for Historic Preservation, as well as the former president of Scenic America.

Some of the highlights of Sen. Fuller Clark’s career occurred in 2007 and 2008, where she was the co-chair of the New Hampshire Committee to elect Barack Obama. Additionally, she was a member of the United States Electoral College in 2008 and cast one of New Hampshire’s four electoral votes for Barack Obama and Joe Biden. Sen. Fuller Clark earned a master’s degree in art history from Boston University and an undergraduate degree from Mills College. 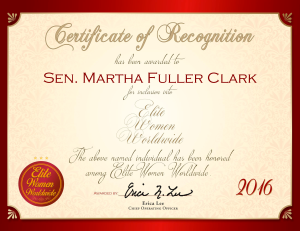