Nutley, NJ, May 5, 2016, Christina Kyriazis, Teleprompter Operator at The Daily Show with Trevor Noah, has been recognized by Elite Women Worldwide, for dedication, achievement and leadership in media production.

Ms. Kyriazis is a 10-time Emmy-winning teleprompter operator, who has provided her services to The Daily Show for more than 15 years. Having worked for the show when Jon Stewart hosted, and presently working with Trevor Noah, she has contributed greatly to the smooth and seamless running of the late night talk show. Committed to familiarizing herself with episode scripts, and proofreading scripts, she is recognized for her work in television production with her incomparable ability to operate the teleprompter.

In 1988, Ms. Kyriazis graduated Fordham University with a Bachelor of Science in communications and through hard work, began working in the industry. To stay current and ahead of trends, she maintains affiliation with the National Academy of Television Arts & Sciences and IATSE Local 100. When not working at one of television’s most notorious shows, she supports the New York Rescue Mission, Race for the Cure and St. Basil’s Academy. In the years to come, she endeavors to continue working at The Daily Show with Trevor Noah and supplying her talents to the Emmy-winning program. 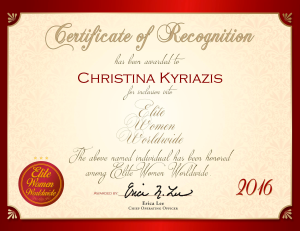