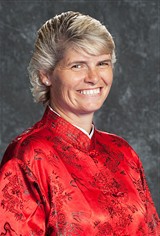 Long before opening Academy of Life & Leadership Taekwondo, Barb Kunkel enjoyed a celebrated career as one of the most respected female taekwondo practitioners in the world. Yet, she will be the first to admit that reaching this status was not an easy journey. Ms. Kunkel prepared for her career by training daily, competing nationally and working with the best coaches in the country. Now a 7th Degree Black Belt, Ms. Kunkel was one of four total athletes and one of two females in the United States to compete in the first official Olympic Taekwondo Games in 2000, which took place in Australia. She is honored to be part of the team that secured the four spots for the United States in the 2000 Olympic Games, as only six countries in the world were able to do this. She also served as the U.S. National Team Captain and the Taekwondo athlete ambassador to the Olympic Committee, as well as on the USA Taekwondo Board of Directors.

Noted for her positive attitude and ability to speak publicly to all audiences, she believes competing in the Olympics and beating stage 3 breast cancer, teaching, and coaching the community, especially the internationally ranked demonstration team, to be among her greatest accomplishments. Passionate about empowering others to be the best they can be, Ms. Kunkel strives to be a role model for anyone who is interested in following a similar career path. That path is having a dream, making goals toward that dream and then bringing that goal/dream to fruition.

She believes Martial arts is a great activity for everyone, especially young people, because no matter how long someone does Martial arts, their life will be impacted in a positive manner and they will be a better person, not just physically, but in their character as well. Outside of her role with Academy of Life & Leadership Taekwondo, Ms. Kunkel coached the National Sparring Team, and at the present moment is also pioneering the national demonstration team, which is currently ranked second in the world.

She supports and volunteers her time with World Vision, Compassion International and many local schools in building leadership skills in young people, in addition to assisting the Olympic Movement by speaking, planting seeds and developing programs for young athletes. On a more personal level, Ms. Kunkel enjoys spending time with her children, travelling with them, and spending time in the company of family and good friends. Her advice is to “Dream Big & Never give up on your dreams” – as they can come true! 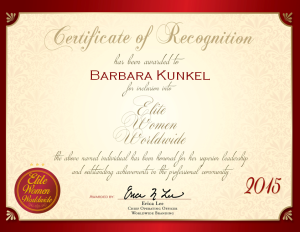