Charlotte, NC, November 27, 2015, Christine P. Gallagher, Director of Sales with Trident, has been recognized by Elite Women Worldwide, for dedication, achievement and leadership in customer relations.

Well-versed in understanding and addressing customer needs, Ms. Gallagher has dedicated the last two decades to become a respected expert in her field. What began as a temporary job with a value branding company eventually blossomed into a successful career when she became involved with new product development. In this position, she was entrusted with the responsibilities associated with managing product development, which eventually led to her role with Trident. As the director of sales, Ms. Gallagher primarily works on the graphic side of sales while maintaining responsibility for sales, business development sales and commercialization. In a prior role, she was noted for growing sales on key accounts by more than 50 percent.

Above all else, Ms. Gallagher thrives on versatility, which is why she enjoys having a career that allows her to work in so many different areas of the industry. Throughout the course of her career, she has worked with several household names, including Johnson & Johnson, which is said to have had its best year with her company while she was in her current position. Despite working in an extremely critical role, Ms. Gallagher manages to find time to raise her three daughters, in addition to serving as a mentor for young women through Phi Sigma Sigma. She plans to be globally focused as she moves forward with her career. 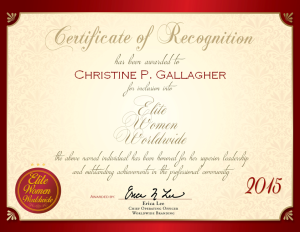